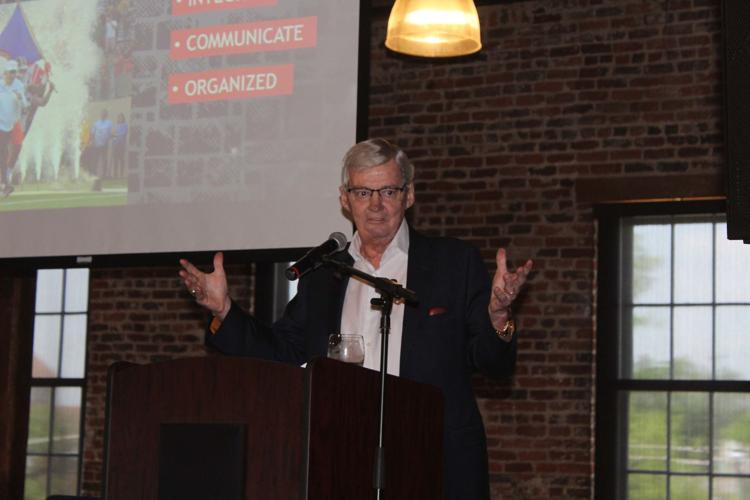 “I was asked here a while ago why are you here. I said ‘we need to build a school.’ It’s so important these days that we give our kids the best education we can… I’m so impressed with what you all are doing here, and I understand the need,” said Beamer during a lunch at The Prizery to kick off the capital campaign to help pay for the new school.

With an impressive coaching career lasting over 40 years, Beamer said he is often asked about his foundation, and he said Superintendent Dr. Mark Lineburg’s dad was just as influential in his life as anyone.

Lineburg’s dad was a coach at Radford High School and gave Beamer his first job as an assistant football coach.

“He knew football, but he taught me the one thing that was the most important thing — that you need to care about those players. In this business when things go bad and you lose on Saturday, there’s only one group who will get you out of it — it’s the players,” said Beamer.

The coach who led his team to 23 straight bowl games from 1993 to 2015 went on to talk about the three main things that one needs to be successful -- integrity, communication and organization.

He spoke about the integrity that Jason Millard had when he turned himself in for possibly falsifying a scorecard when he chose not to note a two-strike penalty for maybe striking sand with his golf club.

His club could’ve hit the sand, or maybe it didn’t.

“But, he couldn’t get it out of his head. No one was there… he wanted to celebrate, but he couldn’t,” said Beamer. “He was on his way to the U.S. Open when he pulled over and turned himself in. He knew in his heart something wasn’t right.”

Virginia Tech’s Edmunds brothers from Danville were the center of his next lesson focused on saying what you mean and meaning what you say.

When Beamer announced to the three brothers, Trey, Terrell and Tremaine, he would be giving each of them a scholarship to Tech, he offered them something else too – peace of mind.

“I told them, ‘If something happens, and you don’t play, you will still be on scholarship and earn your degree,’” said Beamer. “I think that’s what sold the deal, and throughout it all, those boys have been able to stay humble and kind.”

When it comes time to work, Beamer said he wants to make sure all the details are taken care of, but once they’re done, he goes home.

He said when a season starts, he brings everyone in a room that is responsible for the team’s success, from the secretaries to the trainers, and he lays out their responsibilities and their schedule one by one.

For him, it was about being able to tell his staff when they would be able to spend time with their family.

He also said his wife taught him a valuable lesson about complimenting someone when necessary.

“I always thought if I didn’t say anything to you, I figured you knew you did a good job. And my wife said, ‘well, don’t you like praise?’” said Beamer.

From then on, he would praise people when necessary in front of their peers, and if someone needed to be corrected, he would do it in private.

With these three qualities — integrity, communication and organization — Beamer said it will keep everything going on the right track.

Lineburg and high school principal Michael Lewis made it obvious they were proud of the student’s accomplishments and the integrity they’ve displayed when they offered remarks.

Lewis highlighted numerous accomplishments of the high school’s culinary students who have been invited to compete in the National Leadership Conference for Applied Culinary Math for Management, the Comebots who made it to the FIRST World Competition for the second year in a row, the students who completed the Teachers for Tomorrow program and many of the athletic teams.

He spoke of how the high school and its classes are being “re-imagined” to form hybrid classes such as a class combining English and biology.

“Our students and our future need a building to match,” said Lewis.

In his remarks, Lineburg reminded the packed house of House Bill 1634 that provides for a voter referendum in November on a 1-cent sales tax increase to be used to help fund construction of a new high school.

He said the bill started at a table in the 360 Diner and made its way before the House of the Delegates and the Senate where members of the high school’s leadership class were responsible for helping get it passed.

Speaking about Edmunds’ and his efforts, Lineburg said, “I’ve never seen a human being work harder… it takes courage.”

Referring to the votes needed to get the referendum passed, Lineburg told the crowd, “We must get this right.”

Before giving an invocation, Halifax County School Board Trustee Walter Potts said looking out into the packed crowd showed him that they all have a concern for the school system.

“We want to get this school built,” he added. 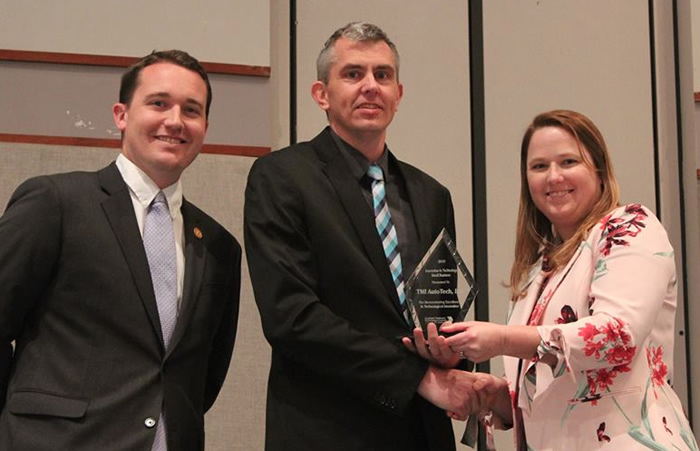