With several ceremonial shovels full of Southside Virginia soil last Thursday,  EMPOWER Broadband, Inc. commemorated a significant stride forward in leveling the playing field between rural and urban communities by launching a significant expansion of their fiber network.
EMPOWER employees were joined by state Sen. Frank Ruff and Delegate Tommy Wright, along with other state, regional and local leaders, for a groundbreaking ceremony to celebrate the start of construction on a $154 million initiative to bring high-speed internet to 14,634 unserved and underserved locations in Halifax, Mecklenburg and the southern portions of Charlotte and Brunswick counties. 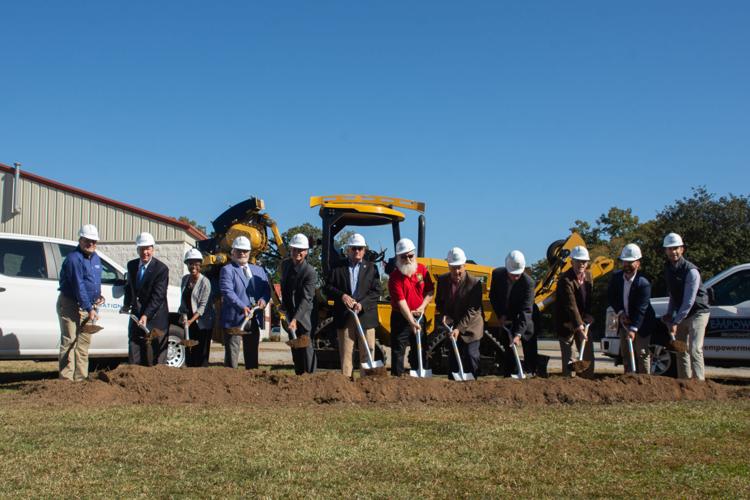 The ceremony was held at Palmer Springs Fire Department in south central Mecklenburg County in one of the first areas for fiber to be deployed in this project.

As several speakers took the podium, a theme emerged — partnerships. From the project’s outset, many strong partnerships have been fostered in EMPOWER’s quest to bring rural citizens access to much-needed broadband service. EMPOWER leaders expressed profound gratitude to those in attendance who had helped pave the way for this historic event.

“We extend our sincere appreciation to the great teams and administrators at Brunswick, Charlotte, Halifax and Mecklenburg counties, our partners at the Tobacco Commission, whose early grant set a foundation for all we celebrate here today, to the Department of Housing and Community Development whose staff believe so passionately in their mission of improving the quality of life for all Virginians, to our friends at Dominion Energy and Mid-Atlantic Broadband, and to the Southside Planning District Commission, who served as our grant sponsor, and whose team has assisted us in many other ways,” said John C. Lee Jr., EMPOWER president and CEO, as he addressed the crowd of nearly 100 attendees.

“The relationships EMPOWER has built with all our partners are based on a mutual respect and admiration, and in answering the call to action to bring broadband to the communities we serve,” he added. “Our project partners are strong, resource rich organizations staffed with competent individuals who are also good people. We place great confidence in their work ethic and urgent approach to get the job done.”

William “Bill” Curtis, assistant director of Department of Housing and Community Development, said, “None of these efforts would have been possible without the commitment and hard work of so many partners who have been key stakeholders throughout the entire process.

DCHD awarded a substantial grant to EMPOWER for the project under the Virginia Telecommunications Initiative.

“This three-year project will be transformational for the region. Through partnerships at the local, state and federal levels, we look forward to continuing to work together connecting Virginians and celebrating more achievements like this,” Curtis said. 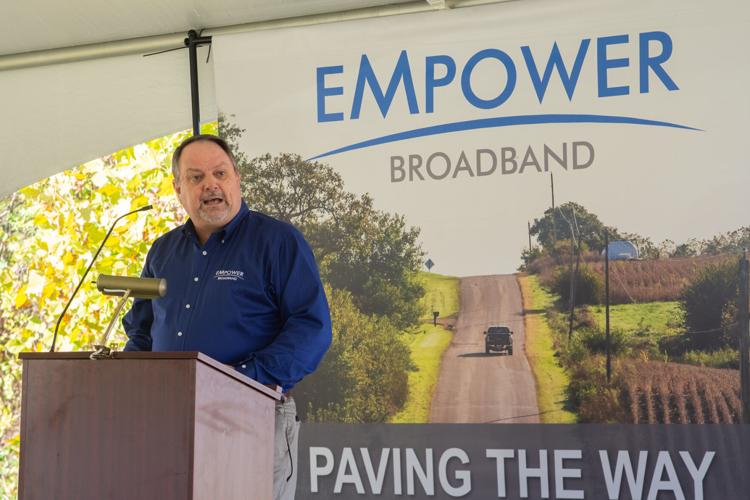 “Our state and its leaders have, over the last few years, set a clear goal to achieve universal broadband access within 10 years and close the digital divide,” Deborah Gosney, executive director of the Southside Planning District Commission, said. “The commonwealth is now on track to be one of the first states to achieve this goal. It will be accomplished by the relationships that are being cultivated around the state between local governments, regional organizations, private internet service providers and state and federal funding agencies.”

According to Gosney, this project partnership resulted in EMPOWER and the Southside Planning District Commission receiving the fourth largest fiscal year VATI grant award totaling $69.43 million from a pool of 35 awarded applications.

“EMPOWER has a proven solid record of performance, and we look forward to working with them over the next three years to achieve what is now a necessity, not a luxury — high-speed reliable broadband for all,” she added.

Lee also recognized EMPOWER’s Owner Engineer Magellan Advisors for their engineering and oversight assistance in this expansive project, and National OnDemand, a highly regarded organization who was recently selected as the prime contractor to install the mainline fiber.

The mission
In early 2018, Mecklenburg Electric Cooperative found itself uniquely positioned to step into the broadband arena. Finding it necessary to upgrade its communications network to a technology capable of transferring massive amounts of data to maximize the operation of its electric distribution system, the cooperative evaluated the construction of a fiber network. That solution also rendered the prospect of addressing the region’s growing need for high-speed broadband.

“This fiber optic network capably addressed all our electric service communications challenges,” David Jones, chairman of both the MEC and EMPOWER boards of directors, said. “And then, it created an unforeseen opportunity. When no one else would, our cooperative delivered electricity in 1938, and telephone service in 1951. This fiber network deployment presented yet a third opportunity to deliver on our mission to bring value to the communities we serve and improve their quality of life.”

MEC leaders recognized early on that a fiber solution offered the potential of delivering high-speed internet service to its members and found it inconceivable to pass by the homes of so many and not make every effort to share the benefits of such a resource. Embracing this new mission, MEC established its wholly owned subsidiary, EMPOWER, and the significant task of expanding the fiber network to meet the broadband needs of its members and communities began.

Moving forward
“We know that our communities are eager for this project to move forward and bring the entire region access to this critically important service,” Lee said. “Our teams at MEC and EMPOWER are working diligently to commence the construction phase of this project with the urgency it demands. Now, more than ever, high speed broadband is essential, and we are doing our part to deliver this service to our rural residents.”

As Lee stood at the podium, he announced that on this auspicious day, EMPOWER Broadband had connected its 3,000th customer.

“Even prior to this launch, we’ve been making substantial progress…but we know that everyone wants broadband yesterday … and we are coming,” Lee said “We do ask for patience recognizing that no one else would take on this significant undertaking, and we cannot mitigate 15 years of internet service providers ignoring our region in a year or two, especially with fiber. It takes time to construct and deploy … but it will not disappoint. It’s the world’s best broadband technology and it’s time for our region to stop settling for less.”

Over the next three years, this project will expand the availability of broadband by passing 30,000 homes, businesses, churches and community organizations and expand EMPOWER’s network to include an additional 3,000 miles of fiber optic cable in a system that will stretch across portions of seven counties, including six in Virginia, and one in northern North Carolina.

EMPOWER officials also are excited to announce that all 2022 eligible homes, along with a projected year of completion, have been posted online at www.empowermec.net.

Current eligibility, as well as those included in the three-year project, are all illustrated by color and phase as outlined in the map’s legend. Schedules are only projections and are likely to evolve as the project progresses depending on weather, material availability and other factors such as railroad crossings that can take considerable time for approval.

Additionally, EMPOWER is updating its website to include a dashboard that will illustrate the progression of the overall project utilizing several categories of deployment indices. The dashboard includes graphs tracking fiber installation and will evolve to include additional key metrics.

The Southern Virginia Higher Education Center has received a $10,000 grant from the Dollar General Literacy Foundation, one of $120,000 in literacy grants the foundation announced Thursday it was giving to Virginia nonprofit organizations, libraries and schools.

These funds are aimed at supporting adult, family and summer literacy programs within a 20-mile radius of a Dollar General store or distribution center across the 44 states Dollar General serves.

The grants awarded to Virginia organizations are expected to positively impact the lives of more than 5,000 Virginians.

“In keeping with Dollar General’s mission of Serving Others, we are excited to provide grants to support literacy and education initiatives in the communities we proudly call home,” said Todd Vasos, Dollar General’s CEO and Dollar General Literacy Foundation board member. “Each year, funds provided by the Dollar General Literacy Foundation make a real difference by providing the tools that students, adults and families need to pursue new opportunities and accomplish their goals. We believe these programs empower the communities we serve, and we are honored to play a role in their success.”