Sturdy but in forlorn condition, the Randolph Hotel is being gutted inside to prepare for a brighter future — one that Town of South Boston officials hope to usher in by 2020. 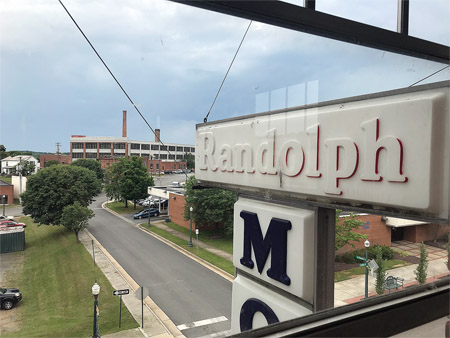 Workers have torn out much of the ceilings, walls, and plumbing inside the shuttered downtown inn, prepping it for extensive renovations and eventual reopening as a boutique hotel with a restaurant and rooftop bar. South Boston has lined up a hospitality industry partner to operate the hotel, but first comes the work of restoring the building to its former glory.

Built in 1929 and 1930, the John Randolph Hotel originally featured 44 rooms, each roughly 11 feet square with a shared bath with the neighboring room. “You’d have to lock the neighbor’s door [to the bathroom] and hope you remembered to unlock it,” explained Town Manager Tom Raab.

The plan for the new Randolph envisions a much greater aura of luxury — rooms are projected to go for $130 and $150 a night, with the target audience being the professional class associated with major businesses in the area, such as ABB and Microsoft. The number of rooms will be cut to 22, achieved by knocking out the walls between the old rooms.

While aspects of the old hotel were fairly modest — the Randolph dates back to the Great Depression, after all —other parts of the structure are downright grand: of the three front doors that empty out onto Main Street, the middle entrance leads into a hall with a marble staircase and a terrazzo floor, which was a popular flooring option for art deco buildings at the time. The most famous example of terrazzo flooring is the Hollywood walk of fame.

The builders’ original intentions were to make the structure fireproof, which they did by using brick and steel beams instead of wood.

“They advertised this building as fireproof. This is ’29,’30 and they’re using basically steel 2x4s,” Raab said.

Crews have been laboring to strip away the decayed, unsalvageable and motley aspects of the hotel, which later became the Randolph Motor Inn and then was turned into apartments. The apartments were weekly rentals. Last used in 1990, the Randolph closed for good in the ‘90s, and it has been derelict since.

Raab said the Town has scheduled two more demolition days to prepare the building for renovations, but in the meantime, the inn’s solid construction has created a conundrum: where to fit a larger, ADA-compliant elevator in a building where steel support beams run the full height.

“It’s definitely a work in progress. My architect’s about to pull his hair out,” Raab said.

In 2011, the town purchased the hotel and approached developers Hal Craddock and Ed Gaskins to evaluate the building. In 2017, the town announced its intention to turn the space into a boutique hotel.

“It’s been a fixture of downtown,” said Raab of the thinking behind the Randolph’s planned rebirth. “Two things could have happened to it: it could have been torn down and left a vacant hole, which is what we have across the street. The other thing that could’ve happened is that it be made into apartments, which is still a good use. But I think the best is to return it to its original purpose as a hotel.” 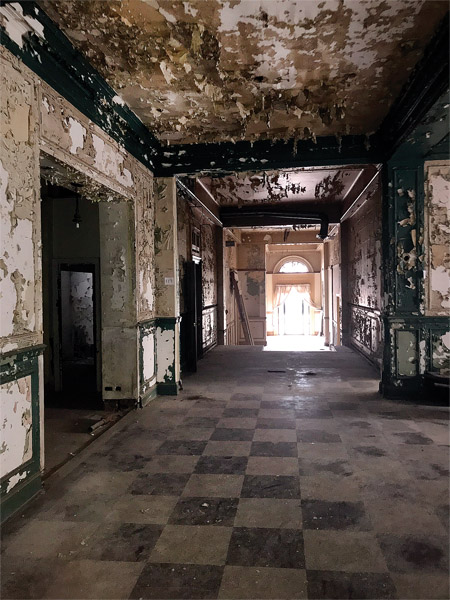 The town has secured roughly a million dollars in grant funding to go along with millions in private investment, much of it gained through the sale of federal and state historic tax credits. Once the town has an architectural design in hand for the new Randolph, it will field proposals by construction companies to carry out the renovation. Once a contractor is selected, it should be about a 12-month building restoration, said Raab.

Upon completion, the Randolph will be operated by Cornerstone Hospitality, a Williamsburg firm that specializes in small boutique hotels. One of their most notable projects is the Craddock Terry Hotel in Lynchburg, which occupies a space once held by the long-gone Craddock-Terry Shoe Company.

Raab said the town solicited Cornerstone for their expertise and because the town thought they would have enough capital to put into the project.

Once the building is finished, the first floor will house hotel administration offices, an elevator, restrooms, outdoor stairs leading to the roof, laundry services, a renovated telephone booth where the hotel long ago had a public telephone, and a restaurant open to the public.

To build the ground-floor restaurant, which would need a larger kitchen space than currently exists in the Randolph proper, the town purchased the building next door. The single-story structure with a metal, domed roof was previously owned by Wayne Adams. It served as a karate studio until Adams rented it to Walls of Salvation, Gates of Praise Ministries. The town will take the rear half of the building to free up space for the restaurant’s kitchen, and use the front half as an auditorium that can be rented out for events.

“This would be a great place for reunions, small seminars,” Raab said.

The rooftop bar is envisioned as a major draw for the hotel and for all of downtown South Boston: Raab said that the county tourism office is interested in incorporating the Randolph into a countywide advertisement campaign. It would be a place to entertain out-of-town friends while providing an open-air, bird’s eye venue to impress business clients.

The town will lease the property to the hotel company for minimal rent over ten years before turning it over to private ownership under the terms of the grants issued to the town to carry out the project.

These future plans, however, must await the completion of renovations. Raab expressed confidence that work could begin soon to restore the Randolph to its past splendor, despite prior setbacks.

“I hope by August, September, we can get started on construction and by next year we’ll see it open,” Raab said.

Halifax was one of 12 counties in Virginia that received a share of $4.9 million in grants through the Virginia Telecommunication Initiative (VATI), which provides targeted funding to extend service to areas that are unserved by any broadband provider.

“In our 21st century economy, broadband connectivity is tied to every facet of our daily lives, from education to business to health care — that’s why making high-speed internet available to every Virginian, in every region of the Commonwealth is a top priority for my administration,” said Gov. Ralph Northam in announcing the grant awards on Friday.

“This funding will help to close the digital divide in Virginia by putting in place the necessary infrastructure to expand affordable and reliable broadband service to currently unserved rural communities.”