Next step for community strategic plan 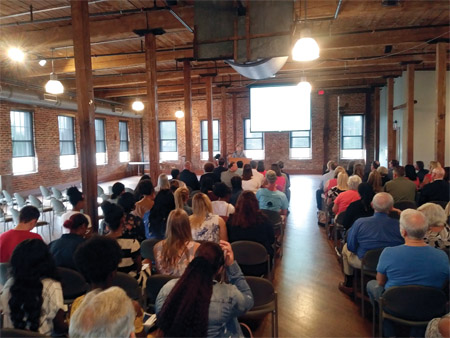 The next stage of the Community Strategic Plan — the implementation — kicked off Wednesday night at The Prizery with a call to action by community leaders who say Halifax County must do more to reverse its recent declines.

Working off that theme, a series of speakers talked about specific areas they hope to address: everything from educational and career training opportunities to expanding the local motorsports economy to organizing more community litter clean-up campaigns. But hovering above it all was a plea for citizens to get involved, and buy into the idea that Halifax County can captain its own ship.

“Change is disturbing when done to us, exhilarating when done by us,” said Board of Supervisors chairman Dennis Witt, one of three co-chairs of an ad hoc steering committee organized to draw up and carry out the strategic plan. “We have an opportunity to change Halifax County for the positive — to move forward, to provide all the quality of life issues we’ve talked about tonight.”

Roughly a dozen speakers talked about specific aspects of the strategic plan, which was guided by an Atlanta-based economic consulting firm, Market Street Services. The first phase of the process was a community assessment, drawn from more than 1,500 responses via an online survey and focus group interviews. Matt DeVeau, a Market Street consultant who has advised the 26-member steering committee, praised the level of engagement that local citizens showed in responding to the survey.

“The key to this type of initiative is to treat it like a team sport,” DeVeau said. “I’m very encouraged to say that’s what we encountered.”

After undertaking the community assessment, the steering committee unveiled its strategic plan last month. Wednesday night’s meeting in The Prizery banquet hall was billed as a chance to fill in the details, although speakers mostly stuck to broad themes and offered few specifics.

Some of the points, however, were new: the formation of a “Yes for HCHS” committee to support a local sales tax increase to fund school facility improvements. That decision will be placed before voters in a ballot referendum in November. To support the “Yes for HCHS” committee, speakers asked members of the audience to sign up for a speakers bureau, with volunteers fanning out around the county to make the case for the sales tax referendum.

“You have to go out and talk to friends and neighbors, because this is a small group who really cares,” said Witt, referring to the audience that filled up the second-floor banquet hall. “That’s why you’re here tonight, and I thank you for that.”

County Administrator Scott Simpson, speaking on another key initiative in the strategic plan — providing countywide broadband access — said the Board of Supervisors has lined up funding, mostly through grants, to erect 10 communications towers in the northern Halifax County area, and the board is pursuing funding to put up seven more towers in the near future.

Simpson also discussed the county’s plans to develop an industrial hemp processing center, observing of the recently legalized crop, “You can grow it all day long, but if you don’t have a way to process it, it doesn’t do a lot of good for farmers or the county.”

The core goal of the strategic plan, according to its backers, is to raise prosperity, increase economic opportunity and improve the quality of life for all residents of Halifax County. In three broad areas — workforce, economy and community — implementation will take place in 11 areas:

» Build modern high school facilities, with passage of the fall voter referendum being a paramount goal;

» Attract outside jobs and investment;

» Retain and support existing businesses, with an emphasis on expanding jobs by fostering growth of incumbent employers;

» Support the creation of the Henrietta Lacks Life Science Center, which is envisioned as a cancer research cluster serving southern Virginia;

» Optimize the climate of investment in downtown South Boston and Halifax;

Some of the speakers pointed to recent successes in community development: South Boston Town Manager Tom Raab said his presentation could be narrowed down to three things: “MBC, Microsoft and the John Randolph hotel.” The first two are a reference to the new tech building going up on Wilborn Avenue in the coming year; the latter item refers to the town’s ongoing work to reopen the shuttered downtown inn as a boutique hotel with rooftop bar.

Superintendent of Schools Mark Lineburg hailed the county’s success is getting House Bill 1634, patroned by Del. James Edmunds, through the General Assembly. The bill will allow Halifax County to hold the first-ever referendum in Virginia to enact a 1-cent local sales tax increase, with the revenue earmarked for school capital projects.

“What we want to do is make our high school a career center,” said Lineburg, noting that the sales tax referendum is essential if Halifax County plans to move forward a modern, career-focused program of studies at HCHS.

A new facility is crucial, he added, only insofar as it supports the goal of changing the way high school students are prepared for the future, whether they’re headed into the workplace or to college.

“It [the new building] doesn’t matter if we don’t have a great program in place [at HCHS],” said Lineburg.

SVHEC Executive Director Betty Adams, another of the steering committee’s three co-chairs, said she has been encouraged throughout the process that citizens have shown “we are not ready to give up on Halifax County.” But echoing Witt, who said implementation of the ideas in the plan would be “a grind,” Adams said members of the community must brace themselves for the cries of naysayers who say it can’t be done.

She urged the audience “to reject negative voices that would hold us back,” adding that “I just love being back home” in her role leading the SVHEC. “This should be a defining moment for our community,” Adams said, “but only if people get behind it.”

Copies of the Community Strategic Plan can be downloaded at halifaxvastrategy.com. 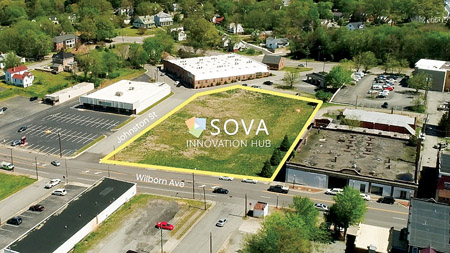