The Industrial Development Authority of Halifax County is pleased to announce the hiring of Mr. Brian K. Brown as its new Executive Director. Mr. Brown is a resident of Roanoke and most recently was employed as a Market Executive for Countryside Service Company, real estate developers in Staunton, Virginia. Mr. Brown has extensive experience in local economic development having served for over seven years as the Economic Development Director for the City of Buena Vista and as the Economic Development Administrator for the City of Roanoke before that. He also has private sector experience from his employment as a Marketing Coordinator and Business Development Representative with Hayes, Seay, Mattern & Mattern, an engineering firm in Roanoke.

In his role as Executive Director Mr. Brown will be responsible for directing the operations, programs and projects of the Halifax IDA. His first priority will be to deploy and manage a comprehensive plan for economic development, including business recruitment, retention and expansion programs. The Executive Director’s responsibilities also include managing and marketing the IDA’s inventory of land and buildings.

Mr. Brown replaces Matt Leonard who departed the IDA on November 1, 2018. Deputy Director Kristy Johnson has served as Interim Director since then.

IDA Chair Robert Bates expressed his pleasure at filling the Executive Director position: “Assisted by The Berkley Group, we had a strong pool of candidates and Mr. Brown impressed both the Search Committee and the whole Board with his experience, his understanding of Halifax County, and his approach to economic development and community building. We look forward to having him as a member of our community.”

Mr. Bates expressed his appreciation to The Berkley Group and the members of the search committee for their work in the recruitment process. He added, “I also want to express my and the entire board’s sincere thanks to Kristy Johnson for her leadership and guidance through this transition. She has done a great job, and we are most grateful.”

Mr. Brown stated, “I am excited about this opportunity to serve Halifax County and I look forward to being an active member of the community.”

Mr. Brown will assume the position of Executive Director of the Industrial Development Authority of Halifax County on September 1st, at a starting salary of $105,000. 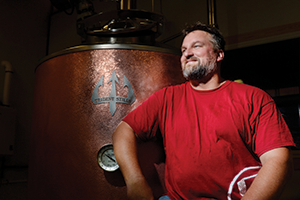 James Gordon, the owner of Springfield Distillery, comes by his interest in whiskey naturally. “I grew up with memories of my father moonshining,” says Gordon, who opened his Halifax County distillery in August 2016. “My father is one of the first two private individuals in South Africa to get his license for distilling liquor. I get to tap into 25 years of distillery experience.”

Springfield Distillery is expected to create five jobs and get all of its corn and barley from Virginia farmers. Read more.