For broadband, a regional approach 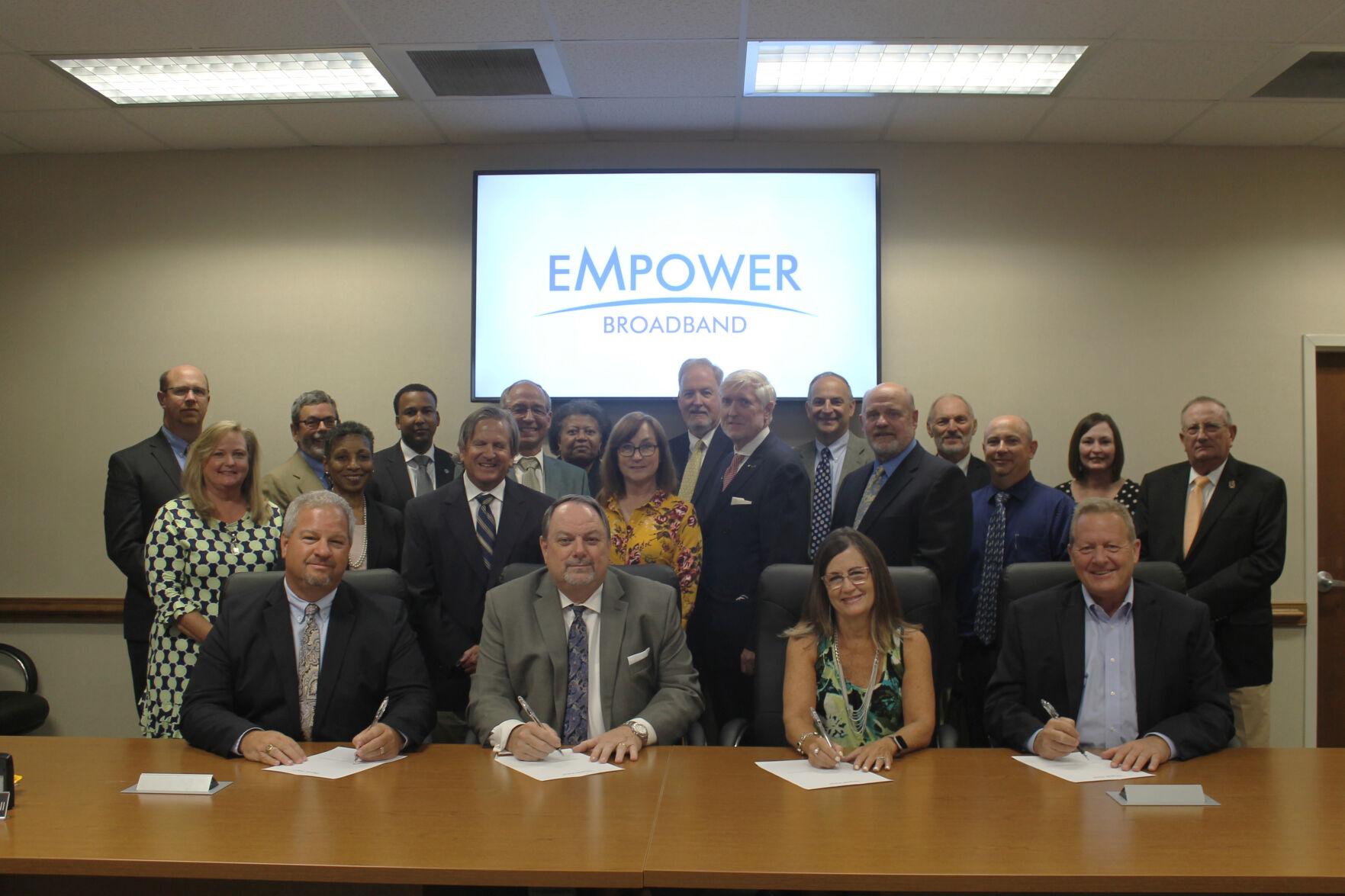 EMPOWER Broadband and the Southside Planning District Commission (SPDC) have submitted a grant application to the Virginia Department of Housing and Community Development’s Virginia Telecommunications Initiative (VATI) to provide universal fiber-to-the-home broadband coverage, over a 36-month timeline to remaining unserved and underserved areas in the Counties of Brunswick, Halifax, Mecklenburg and the southern portion of Charlotte.

The grant application includes a projected cost of $61 million to deploy 810 miles of fiber passing 4,007 locations in Halifax County. The county proposes a match of $2.6 million with EMPOWER and others providing $31 million with a matching request to the VATI program at $27 million.

Halifax County administrator Scott Simpson said, “EMPOWER Broadband has been actively deploying fiber-to-the-premises to our county and across the area with increasing intensity. They are delivering on their grant commitments and more of our citizens are receiving their robust broadband service on a weekly basis. If successful, this grant would be a significant development that would allow EMPOWER to extend its proven service even further into our county and region.”

EMPOWER was recently awarded the bid to complete a fiber-to-the-premise solution in response to SPDC’s Request for Proposals (RFP) to provide high-speed internet service to its three-county member jurisdictions, Brunswick, Halifax and Mecklenburg counties.

As the SPDC, and its counties, sought to provide the strongest VATI application possible, they elected to include the southern portion of Charlotte County, who had independently conducted its own RFP, which also was won by EMPOWER.

This regional approach has been strongly encouraged by VATI as it seeks to provide universal service to significant portions of the Commonwealth and meet Governor Ralph Northam’s directive to provide high-speed broadband to all those who lack needed broadband services.

EMPOWER President and CEO John C. Lee Jr. said, “During this most recent VATI grant cycle, DHCD challenged providers to think big and submit proposals that essentially checked-off entire counties or regions where residents continue to lack high-speed internet. EMPOWER’s team, including its board of directors and staff, envisioned this round of funding as an extraordinary prospect to complete our mission of bringing desperately needed broadband service to the unserved areas of Southside Virginia. Our entry into this business was prompted by our membership, and we have taken a structured approach to this point that has positioned us very well to take advantage of this significant opportunity.”

At the same time, SPDC’s executive director Deborah B. Gosney took notice of these developments and the substantial grant opportunities.

Gosney said, “In the spring of 2021 DHCD began promoting plans to aggressively complete and possibly even shorten Governor Northam ‘s 2028 goal to target broadband service gaps across the Commonwealth. Providing broadband coverage across the counties represented by the SPDC has been one of our primary objectives, and VATI’s direction provided an open door to reach our target.”

Wayne Carter, SPDC commissioner and Mecklenburg County administrator said, “Inadequate broadband has been a major problem for some time as traditional providers have encountered tremendous financial hurdles in serving our rural areas. However, this has not alleviated the need of our residents. Accordingly, we were pleased to award the SPDC ‘s RFP to provide universal coverage to unserved and underserved areas to EMPOWER Broadband.”

EMPOWER has completed the initial 135-mile fiber backbone supported by Mecklenburg County in a 2018 grant from the Virginia Tobacco Commission. That backbone has served as the foundation for the further expansion of the highspeed network across the region. The grant application includes a projected cost of $73 million to deploy 785 miles of fiber passing 9,085 locations in Mecklenburg County. The county has approved a match of $3 million with EMPOWER and others providing $37 million with a matching request to the VATI program at $33 million.

In recent weeks, Virginia’s legislature appropriated $700 million from the American Rescue Plan Act to match private and locality funds to complete the buildout of high-speed internet to some 230,000 rural residents. This funding represents the Commonwealth’s most significant investment to ensure all Virginia households have access to true high-speed internet.

Leslie Weddington, Brunswick interim county administrator said, “The Commonwealth is making a remarkable contribution to see that our rural areas are provided broadband speed internet. We recognize this will most likely be the largest and final significant push for our areas to receive funding to complete the broadband deployment to unserved families and students. Additionally, we are working together to accomplish what seems like an overwhelming task by joining efforts with the region’s counties, the SPDC, and EMPOWER Broadband.”

The grant application includes a projected cost of $33 million to deploy 405 miles of fiber passing 3,445 locations in Brunswick County. The county proposes a match of $2.2 million with EMPOWER and others providing $15 million with a matching request to the VATI program at $14.9 million.

Additionally, the grant application includes a projected cost of $6.5 million to deploy 88 miles of fiber passing 434 locations in southern Charlotte County. The county has approved a match of $651,000 with EMPOWER and others providing $2.9 million with a matching request to the VATI program at $2.9 million.

Projected capital costs to serve the four-county area covered by the application, over a three-year period, totals $175 million, elevating the need for a significant matching share from the VATI program.

The SPDC plans to submit a request to DHCD for just over $78 million to reach nearly 17,000 premises that suffer with woefully inadequate broadband. This amount will facilitate the construction of a solid fiber-to-the-premise network capable of providing broadband speeds up to 1,000 Megabits per second to area residents and businesses.

A significant advantage of fiber-based broadband is its ability to meet the speeds required today as well as tomorrow. Fiber construction delivers a long-term solution without requiring multiple upgrades over time, and its strength and speed are also unaffected by weather or terrain conditions.

David Jones, chairman of the EMPOWER Broadband board of directors, said, “EMPOWER’s parent company, Mecklenburg Electric Cooperative, has served Southside Virginia for over 80 years. Over that time, it has become more than apparent that if our residents are to receive access to critically important broadband infrastructure, local leaders must be the driving force behind that mission and its ultimate accomplishment. It’s no different than the Cooperative’s efforts to bring electricity to the countryside in the 1930s when no one else would, and then providing telephone service to Southside Virginia in the 1950s because the giant investor-owned communications companies refused to do so. MEC delivered on both those occasions, and we intend to do so a third time with broadband, as once again, no one is willing to step up and provide broadband comparable to the service enjoyed by our urban neighbors. This partnership with the SPDC and the pending VATI application will pave the path for EMPOWER to meet the broadband needs of Southside Virginia.”

For this application, Dominion Energy and EMPOWER have executed an agreement for Dominion to deploy middle-mile service to facilitate EMPOWER extending last-mile service to previously unserved and underserved populations in Dominion’s service territory. Both Parties believe their partnership can dramatically expand broadband access to presently unserved areas throughout the counties of Brunswick, Halifax, Mecklenburg and southern Charlotte.

In addition to Dominion, EMPOWER also has an agreement with Mid-Atlantic Broadband Communities Corporation (MBC) to utilize their middle-mile fiber facilities when and where needed. Perhaps more importantly, the two entities have a fiber sharing/trading agreement, which has saved EMPOWER substantial costs dollars.

MBC and EMPOWER have worked in coordination over the last few years to leverage the middle-mile fiber network made possible by investments from the Commonwealth of Virginia. For this application, MBC proposes to provide 22 miles of fiber to EMPOWER to assist with the expansion of middle-mile services in Mecklenburg County.

Southside Electric Cooperative (SEC) will be partners with EMPOWER in the project as well. Needed in order to provide universal coverage, SEC will support the effort by providing valuable access to their facilities allowing EMPOWER to cross all electric utility boundaries and provide service to all.

“We are very pleased to be a part of this strong regional initiative to provide universal coverage to those with little or no options for robust broadband service that is essential to provide greater educational opportunities, accommodate telework and telemedicine efforts, and bolster our region’s economic development efforts. We are eager to get started recognizing that the critical need for this service continues to intensify in Southside Virginia’s communities,” Lee stated, adding “Up until this point, EMPOWER has deployed fiber through smaller projects, as funding became available, and we have done exactly as we promised when we began this mission to serve, that we would proceed with prudent deliberation and discipline. With this grant, however, we’ll have the resources to put a foot on the gas and blanket these counties with the resources needed to deliver this life-changing service in a more timely manner.”

The SPDC and EMPOWER submitted the VATI application on Tuesday and anticipate notice of award near year end 2021.

The INDEX is the industry’s most comprehensive rating of rural providers. It provides the data foundation for the annual Rural Relevance Study and its results are the basis for many of rural healthcare’s most prominent awards, advocacy efforts and legislative initiatives. The Top 100 Rural and Community Hospitals play a key role in providing a safety net to communities across America – and the INDEX measures them across eight pillars of hospital strength: Inpatient Market Share, Outpatient Market Share, Cost, Charge, Quality, Outcomes, Patient Perspectives, and Financial Stability. Read more.